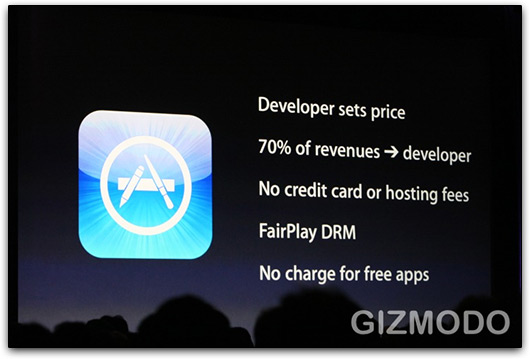 Vale a pena ler a carta:

As an iPhone developer who’s been in the App Store since its launch, I’m starting to see a trend that concerns me: developers are lowering prices to the lowest possible level in order to get favorable placement in iTunes. This proliferation of 99¢ “ringtone apps” is affecting our product development.

Unlike a lot of other developers, I’m not going to give you suggestions on what to do about this: you and your team are perfectly capable of dealing with it on your own terms. Rather, I’d like to give you some insight into how these ringtone apps are affecting my business.

Both of our products, Frenzic and Twitterrific, have been quite successful in the App Store. Frenzic is currently in What’s Hot and Twitterrific appears in both the Top Free and Top Paid Apps for 2008. We also won an ADA at this year’s WWDC. It hasn’t been easy, but we’ve learned what it takes to make a kick ass product for the iPhone.

The problem now is funding those products.

We have a lot of great ideas for iPhone applications. Unfortunately, we’re not working on the cooler (and more complex) ideas. Instead, we’re working on 99¢ titles that have a limited lifespan and broad appeal. Market conditions make ringtone apps most appealing.

Before commencing any new iPhone development, we look at the numbers and evaluate the risk of recouping our investment on a new project. Both developers and designers cost somewhere between $150-200 per hour. For a three man month project, let’s say that’s about $80K in development costs. To break even, we have to sell over 115K units. Not impossible with a good concept and few of weeks of prominent placement in iTunes.

But what happens when we start talking about bigger projects: something that takes 6 or even 9 man months? That’s either $150K or $225K in development costs with a break even at 215K or 322K units. Unless you have a white hot title, selling 10-15K units a day for a few weeks isn’t going to happen. There’s too much risk.

Raising your price to help cover these costs makes it hard to get to the top of the charts. (You’re competing against a lot of other titles in the lower price tier.) You also have to come to terms with the fact that you’re only going to be featured for a short time, so you have to make the bulk of your revenue during this period.

This is why we’re going for simple and cheap instead of complex and expensive. Not our preferred choice, but the one that’s fiscally responsible.

I’m also concerned that this “making it up in volume” approach won’t last too much longer. With 10,000 apps in the App Store, it’s already a fricken’ cat fight to get into one of the top 100 spots. What’s it going to be like when there are 20,000 apps? Or 100,000 apps? Volume is going to get split amongst a lot of players, hopefully the number of devices/customers will increase at the same rate.

We’re not afraid of competition. In fact, we welcome it as a way to improve our products and business. The thing we’re hoping for is a way to rise above the competition when we do our job well, not just when we have the lowest price.

I’ve been thinking about what’s causing this rush to the 99¢ price point. From what I can tell, it’s because people are buying our products sight unseen. I see customers complaining about how “expensive” a $4.99 app is and that it should cost less. (Do they do the same thing when they walk into Starbucks?) The only justification I can find for these attitudes is that you only have a screenshot to evaluate the quality of a product. A buck is easy to waste on an app that looks great in iTunes but works poorly once you install it.

Our products are a joy to use: as you well know, customers are willing to pay a premium for a quality products. This quality comes at a cost—which we’re willing to incur. The issue is then getting people to see that our $2.99 product really is worth three times the price of a 99¢ piece of crapware.

I also worry that this low price point for applications is going to limit innovation on the platform. Sure, apps like Ocarina and Koi Pond are very cool and very cheap. But when are we going to see the utility of the platform taken to another level, like when spreadsheets appeared on the Apple ][ and desktop publishing appeared on the Mac? (It could be argued that Safari has already accomplished this, but I still think there is a third party idea that will be just as transformative.)

It would be great if the killer app for the iPhone cost 99¢, but given the numbers above I can’t see it being very likely.

Thanks for your time and attention. I hope this information has been helpful.